Tattoos by Chucho
Chucho has been tattooing professionally since 1994. As a tattooist he has received numerous awards nationally, has had 6 published articles that span over a decade; 1997-2007. His bright, vibrant, bold, and simple in your face tattoo designs are recognizable among tattoo collectors.
Chucho attended the American Academy of Art in Chicago, IL receiving an Associates of Fine Arts Degree in Art/Illustration. He has continued to pursue more in depth and serious study for painting and stone carving with guidance from Master Stone Carvers from Zimbabue and Master Painter Patrick Betaudier. His artwork has been exhibited across the United States as well as in Europe. He has been commissioned to create murals and sculptures for public spaces across the Midwest. Some of these Public Art projects can be seen in Joliet, IL. He has taught mural painting in Chicago, Il for After School Matters creating 5 Public Art mural projects. ASM is a program Mrs. Daley created to help inner city youth.
Chucho is a tattooer so there's no design that is too small or big. He welcomes all designs to give the clients the best possible tattoo. 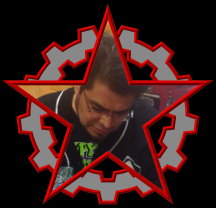